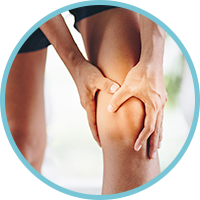 PFPS is a primary cause of knee pain that will affect 25% of people at some point in their lives. It’s even more common in runners, hence being known as runner’s knee. The pain is felt behind the kneecap because of damage to or irritation of the articular cartilage that is present where the patella meets the thigh bone (femur).

Instead of gliding smoothly when the knee is bent, poor knee alignment causes the kneecap to mistrack and instead rub against the thigh bone itself. This causes irritation at the joint and damage to the underlying cartilage and bone. Other causes can include:

Aside from running, PFPS typically is particularly prevalent in basketball, football, volleyball, netball, skiing and other running/jumping sports.

Symptoms tend to come on gradually during high-impact activities such as running, squatting and climbing stairs. It can then continue during low-impact activities like walking and for some, may even be felt during rest. Symptoms include:

Treating PFPS involves addressing the cause of your pain and correcting any alignment issues that may cause the pain to recur in the future. This often involves:

It is crucial not to delay treating PFPS to avoid further damage to the knee joint and the articular cartilage. Because articular cartilage works to protect the bone ends and help them glide smoothly against each other, the more it is damaged, the higher the likelihood for further knee pain and problems.