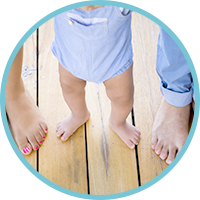 Out-toeing, often described as duck-feet, is the outward turned position of the feet. While out-toeing, just like in-toeing, often occur as a normal part of development in young children, these should resolve completely by the age of eight.

While out-toeing is less common than in-toeing, its implications may be more severe if the out-toeing does not resolve.

There are four main causes for the appearance of out-toeing, all largely associated with the position and rotation of the bones of the lower limbs. These include:

1. The hip - external rotation and contracture

In the womb, the baby’s position can mean that their hips are rotated outwards and flexed upwards. On birth, the hips are held in this tight position which will cause the feet to turn outwards. This condition often resolves on its own as the child grows.

Here, the thigh bone (femur) is angled outwards, thereby angling the knees and feet outwards. This is the least common cause of out-toeing of these four and is often associated with increased weight. It can also place them at risk of developing other hip conditions as well as arthritis.

Flat feet are typically characterised by a very small or non-existent arch with a prominent bulge on the inside of the ankle as it rolls in. This can make the forefoot appear turned out. Flat feet are not uncommon in childhood, and a majority of children will go on to develop an arch as they grow, resolving the appearance of out-toeing.

What are the symptoms?

While many children will experience no symptoms until the out-toeing resolves, others may develop pain in the knees, hips, thighs and feet if the out-toeing continues for a prolonged time. If your child is in any lower limb pain and is showing significant out-toeing, bring them to us for a tailored assessment to identify the underlying cause and the best course of action.

How is out-toeing treated?

Treating out-toeing is completely dependant on the underlying cause. At an early stage, out-toeing may just need monitoring to assess progression and the development of any painful symptoms.

Where out-toeing is a result of flat feet, orthotics and supportive footwear can be used to correct the foot alignment and hence the appearance of out-turned feet. Any muscular contractures of muscular weakness can be addressed using a stretching and strengthening programme.

Where the out-toeing is more severe, does not improve, or is causing painful symptoms, a referral to an orthopaedic surgeon may be necessary.