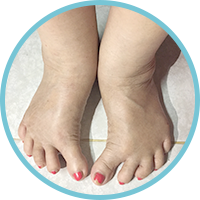 The condition is present from birth and occurs in an estimated 1 in 1000 births. It has been associated with an increased risk of developing other conditions such as hip dysplasia, which affects the stability and functioning of the hip joint.

It is the front half of the foot (toes and midfoot) turning onto the back half of the foot that gives the ‘C’ shape. It is thought to be linked to the baby’s position inside the womb, though the exact cause is indefinite. It may affect one or both feet. Contributing factors are thought to include:

What are the symptoms?

The primary symptom is the curved or ‘C’ shape to the foot. There may also be a:

How is it treated?

Metatarsus adductus should resolve within the first few months of life, although up to 10% of feet won’t, particularly if they are non-flexible. This is where treatment is indicated and may involve:

If your child’s feet appear to be in a ‘C’ shape and you’re concerned, don’t hesitate to bring them in and get checked. Once we assess the severity of the condition and the flexibility present in the feet, we’ll be able to make a tailored treatment plan to get the best outcomes for your child.